Meryl and Alan Wilson and the team of Ecolodges Indonesia have been building a new lodge, Mbeliling Ecolodge as a part of  Trans Flores Safari tour. It lies 820 metres above the port of Labuan Bajo and the Komodo Islands one hour up to a sinuous road to the Mbeliling ecolodge range. Alan was away on business at the Kelimutu lodge on the other side of the island.

Rain thrashed the roof in violent bursts all night, after raining all day on around Mbeliling area. I could hear water gurgling, splashing and trickling everywhere outside. The sound like dull roar like jet engines from the streams, now torrents, around us. Toward dawn, a distant rumble filtered through my sleep.

At first glance that morning, looking out over the distant Komodo Islands nothing seemed amiss. That changed when I had to squelch through mud deposited in front of the restaurant kitchen in our Mbeliling Ecolodge. A wave of water was cresting waist high at a corner in the drain nearby. The kitchen still had no door so a sea of wet had to be mopped up before I could make my solitary breakfast.

A little later our seven workmen appeared and agitatedly said “Come and look”.

First, we saw a 3 cm gap between the cement path and the kitchen. Then at the front some small cracks in the soil before coming to a great bite out of the land. I saw in the front side where deposited rocks, soil and small trees down 15 metres onto the main road half closing it. It left five meters in front of the restaurant, but we could see the legs were on rock.

Slithering down our steep entrance road, now a stream, five metres to our right. North, we found a huge slip had brought down an entire bank. Completely covering the road to Ruteng some five metres deep. Wading ankle deep in mud and water we went left to see ‘our’ landslide, finding four vehicles and about fourteen people stuck.

We suggested they turn back, only to discover that there was a vast double landslide a kilometre back around Mbeliling, closing the road to Labuan Bajo on the coast. They were lucky to be alive. They appropriated our neighbours a simple house and outside kitchen and toilet, ( he had just taken his wife to the hospital to have a baby).

The people were happy to have some food from us, though we did not have much. Fortunately, they had their shopping with them and cooked their own. They slept in the vehicles for two nights, and used the headlights for light and the sound system for a short party! On the other side of the Ruteng slide, two of our staff gave shelter to 15 people. At that time, Dita cooking rice and dried fish for all.

Walking back up the three hundred metres to the top yet -to -be completed cabins. We found a small slip had just missed the generator house, depositing a banana tree on the edge of the road. Mercifully the cabins were still in place through a water tank had been smashed by a fallen tree.

Standing at the top we could see a red gash like a toll road scraped down from the crest of Mbeliling mountain down a valley next to a village. Tiny figures of people were frantically moving around on a heap of mud and broken walls. About a kilometer away as the crow flies.

A man in the village near Mbeliling ecolodge had felt the ground trembling. He realized what was about to happen ran to his relatives’ house and banged on the door. Nobody came, so he raced to the back. He dragged the protesting woman away from the early breakfast she was preparing. As they ran out the mud and rocks engulfed their ankles. The husband with the eight-month-old baby in his arms died as the front room was swept away. Wakil Bupati Ibu Geon told to us as related by the rescuer.

Eight people died there. Many lost their rice terraces and plantations of coffee, cocoa, cinnamon, and candlenut. Our manager Maria in Mbeliling ecolodge has lost the land, most of the already harvested rice, and machinery. One young staff member in Mbeliling ecolodge lost his family home but had no casualties.

There had been no telephone or ‘hot spot’ signal around our Mbeliling Ecolodge. So, Maria and her husband walked three km over the landslide. They want to see if I was all right. They also wanted me to move, but I felt safer in our solid steel structure than perched on the edge of the road in a flimsy house. Not to mention getting 74 years old legs over the landslide. Well, you will be fine as long as it does not rain any more. You can imagine how I prayed for every slash of rain that night to ease off.

Alan Managed to Survive The Landslides

After two days Maria managed to get a message out to the office in Bali and on to Alan. All he knew was that there had been a landslide. None of us knew there had been 23 landslides between Labuan Bajo and Ruteng. Alan was due to fly back on Saturday, so our friend Silvester drove him from the airport to the first blockage on the road having arranged for two of our men to walk down to meet him. The three struggled over six major and several minor landslides, scrambling up the slopes between hairpin bends while carrying chicken, potatoes, bread and bananas, Alan’s computer bag and backpack. 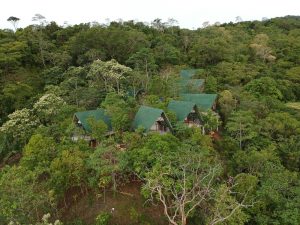 Exhausted, at one-point, Alan was able to go a few hundred metres on the back of a motorbike. Four hours and 18 kilometres later they arrived, utterly spent. Just short of 78 years, God-given strength for Alan to walk that far. The two young men had done the journey twice, 36 km.

That same day our friend for forty years, Ibu Maria Geon, the Wakil Bupati, (Vice Mayor) and her group clambered up to the stricken village and back. Silvester himself crossed later in the day.

There had been utter quiet for some days, till slowly people carrying luggage began to trickle through to meet transport on the far side.  Sometimes they requested for drinking water. One of our smallest workers helped a woman carry her child and baggage across the road. The Road to Ruteng was clear in three days, and in part due to Ibu Geon’s urging, the machines worked dawn to dusk and sometimes later to clear the road to Labuan Bajo.

We expected it to take a month, but it was clear in a week. The men slept under blue plastic sheeting tents, straight on the wet ground just where they were working. Muddy heroes. Then the vehicles and small buses could get through but still no trucks or fuel tankers. Labuan Bajo ‘s boats, cars and even planes were on rations because fuel came via Ruteng.

After the disaster, The government considered an alternative heavy traffic road and now Major Government initiatives are underway. The people have had their losses registered, though initial practical aid came through the Church.

The people never whined, just stating facts, then getting on with what they had, helping each other. It was humbling to be there with them in our lovely Mbeliling Ecolodge area. 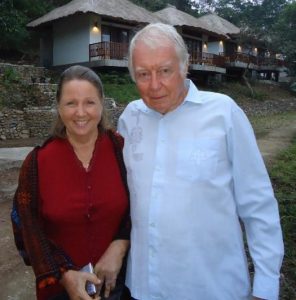