Tanjung Puting National Park has a long history before it becomes a national park.

Tanjung Puting National Park is located in the southeast part of West Kotawaringin Regency in the Indonesian province of Central Kalimantan (Central Borneo).

The nearest main town is the capital of the Regency, Pangkalan Bun. The park is well known for its orangutan conservation. It is composed of 416,040 hectares of dryland dipterocarp forest, peat swampforest, heath forest, mangrove and coastal beach forest, and secondary forest. The public can access the park by speedboat along the Kumai River and then the Sekonyer River to Camp Leakey. The trip takes about 1.5 hours in total.

Four research centers have been established within the park for the study and rehabilitation of orangutans and other primates. One of them is Camp Leakey, which is founded in 1971 with assistance from the Leakey Foundation, was the first of these centers. It was here where Dr. Birute Galdikas began her career studying the behavior of rescued and orphaned orangutans that were reintroduced into the wild.

Her research was highlighted as the cover article of National Geographic in October 1975. Dr. Galdikas is now considered one of the world’s leading experts on orangutan behaviour and is the founder and president of the Orangutan Foundation International and also our honorary shareholder member at our Ecolodges Indonesia and Rimba Orangutan Ecolodge.

1936:   Declared as a game reserve by the then Dutch colonial administration.

1945:   Indonesian independence from Dutch colonial rule.
‘… national economic and political turmoil prevented the Government of Indonesia from dealing with the issues of conservation until the end of the 1970s when significant economic development commenced, and the Government received substantial global assistance for sustainable development’ (Soehartono &  Mardiastuti, 2013). [1]

1981:   Declared a Biosphere Reserve by UNESCO’s Man and the Biosphere Program.

1982:   Third World National Parks Congress was held in Bali, providing the momentum for Indonesia to launch a long term plan to develop its national park system (now there are 50 national parks across Indonesia).

1984:  Declared a National Park by Ministry of Forestry of Indonesia [2]

1985:  Establishment of a Management Unit for Tanjung Puting National Park.

1991:   International Conference on the Great Apes of the World in Jakarta, followed by a field excursion to Tanjung Putting National Park – stimulated the start of a local ecotourism industry with the opening of Rimba Orangutan Ecolodge. 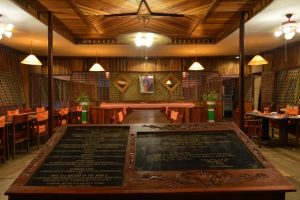