A range of expertise and skills are found in the operation of the Ecolodges, including bus drivers, firemen, environmentalists, veterinarians, academics, hospitality and tourism industry business people, landscape architects, lawyers, philanthropists, ecotourism experts and guides.

We are a company who only employs local people at our lodges as a conservation measure aimed to strengthen and empower their commitment to the environment as an employment source. 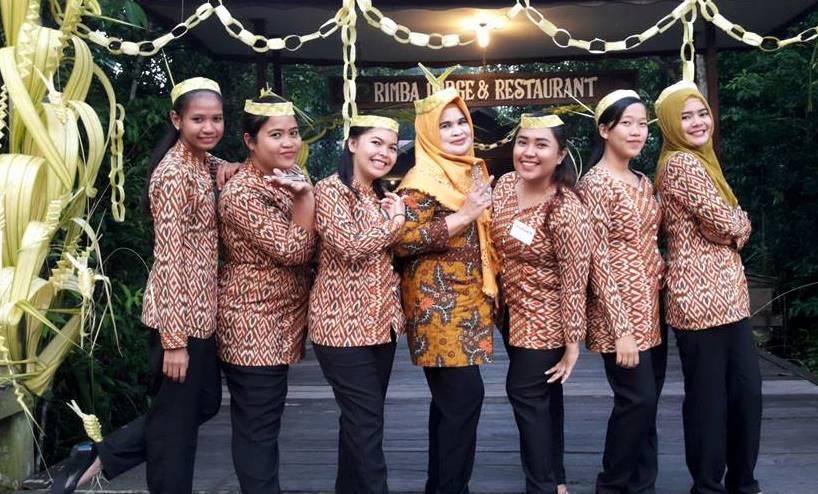 Our Local staff in Satwa

We believe that the protection of national parks will only occur through sustainable jobs to persons on the edge of parks. Our guests thus play a vital role in this process contributing in many ways including a US$10 contribution to the company Conservation Fund for their booking.

Supporters also can become involved in the company as tour leaders, shareholders, supporting specific projects, English trainers, Guiding, Birding and in many other areas.

Alan is the Chairman of Ecolodges Indonesia. Alan was born in Malawi, grew up in Uganda and moved to Indonesia after the Idi Amin period flying his family in a single-engined aircraft from Tororo (Uganda) to Townsville (Australia). He is a veterinarian and now concentrates on working for Ecolodges Indonesia. He is based in Bali with his wife Meryl but both travel widely between the lodges and a home in Australia. In 2009, he was given a Doctorate Honoris Causa from Edinburgh University for his services to the global community and in 2015 a national “Lifetime Services Award” by the Indonesian Government for his services to sports development (especially cricket) in the country over the period 1993 – the present.

Meryl grew up in Kenya. She is a Physiotherapist and interior and eco designer and has a particular expertise in local butterfly species. Meryl is also a pioneer of the company and the design creator and project manager of lodge developments. She has designed and built four of our ecolodges at Udayana, Bajo, Kelimutu and Mbeliling, redesigned two more (Rimba and Satwa), published hand-painted books on Indonesian butterflies (101 Butterflies of Indonesia’s lowlands) and animals principally for educational purposes in primary schools. She is also the Chairman of the company Conservation Fund.

Prof. Birute Galdikas is an internationally recognized scientist, conservationist, anthropologist and educator, founder of Orangutan Foundation International; working with Orangutans in Camp Leakey, Kalimantan for more than four decades. She was born in Lithuania, now an Indonesian citizen dividing her time between the US, Canada and Indonesia. she has been President of the Orangutan International Foundation, is Professor Extraordinaire at the Universitas Nasional, Jakarta; and is a Professor at the Simon Fraser University, British Columbia, Canada.

The Current Board of the company was voted in by the members at the AGM on April 13th 2018.

Gede Anjasmara, our Direktur Utama was appointed on the Board in December 2014. Gede was born in Singaraja, had his tertiary education in Computer Science at Duta Wacana Christian University in Yogyakarta and is our new Direktur Utama (CEO) and we welcome him on the Board. Gede has served us since 1997 firstly in the Ini Radef Foundation and subsequently in the administration of Ecolodges Indonesia. His experience and loyal and honest work are greatly appreciated. Gede takes over at an important time in the company’s history and development and recently with his wife Emi have played a vital role in strengthening the legal status of the company in Indonesia.

Gede Ori Ariandika was born in Singaraja and educated both in Singaraja and Udayana University where he obtained a degree in economics. Gede joined Ecolodges Indonesia in 2000 and has served in the company in many capacities in the Accounts Department, as managers of both Udayana and Rimba lodges, in charge of our Eco-certification process with Green Globe, as a member of the Board of Management and now Head of the companies Tours, Travel and Reservation Department. He plays a key role in all aspects of the development of the company. Recently Gede has played a vital role in the development of our Tours & Travel department. We welcome his appointment on to the Board.

Marie Gale has served faithfully as Company Secretary since Ecolodges Indonesia started in 2008. She lives in Byron Bay, Australia and is very experienced in business practices and is currently CEO of an NGO serving the community.

Helen Scott Orr is one of Australia’s best-known veterinarians having been the Chief Veterinarian for the state of New South Wales and just appointed as Inspector General Disease Prevention. She has had a long and distinguished relationship with Indonesia working in both long and short-term assignments since 1977. Helen speaks fluent Bahasa Indonesia and currently is a private consultant to a number of private and government agencies including AusAID and The Australian Centre for International Agricultural Research. She is The Inspector General of Disease Prevention. Helen lives in Sydney with her husband Tim Kelly.

Alex Diment works for an International Conservation NGO in Myanmar and replaces his father John on the Board. We welcome his International perspectives.

Steve Noakes is the Vice-Chair of the Board of Directors for ecolodges Indonesia. He is a leading advocate across Asia Pacific for approaches to sustainable tourism and nature-based tourism.  He has served terms on the ELI Board since 2008. He has been active in a number of Indonesia tourism projects, including the Indonesia Tourism Development Project being undertaken by the Government of Indonesia with the support of the World Bank and the recent Indonesia/Timor-Leste cross-border tourism project funded by the Asian Development Bank. He is Chair of the Board of Binna Burra Lodge inside the Lamington National Park, Queensland, Australia and has been an Adjunct/Visiting Professor in Sustainable Tourism at Universities in Australia, Finland and Norway.

Geoff is part of the next, younger, generation of Board members and owns and manages a busy veterinary business in Australia. Over a period of 25 years, he has pioneered improved veterinary services on the Gold Coast and northern NSW. Also, he runs an adventure company and currently is the world record holder for a solo crossing of the Antarctic. Geoffrey also has the record for the first wind crossing of the Sahara. Geoffrey is a lateral thinker and brings great business acumen to the Board. He is a great family man and with his wife, Sarah has three children.

John is the best-selling author of the travel memoir ‘On The Road…With Kids’; the winner of the Queensland Literary Awards People’s Choice Book of the Year 2015. He has independently travelled through over 80 countries. Formerly part of the six-man global management team of the Flight Centre Travel Group, and currently head of Sustainability & Acquisitions for the Spicers Retreats boutique hotel chain, John brings a unique mix of hotel operations, eco-focus and travel industry experience to Ecolodges Indonesia. He currently lives in the Currumbin Valley on Australia’s Gold Coast with his wife Mandy and two kids. It’s their base camp for new adventures.

The Board of Management

The day to day management of the company, based at Head Office in Bali, is by a Board of Management whose Chairman currently is Gede Anjasmara (Direktur Utama). This Board includes Gede Ori (Head of Ecosafari Indonesia) and Kadek Dediarini (Head of Accounts). All have served the company loyally for many years.

Ecosafari Indonesia is the Tours & Travel department of Ecolodges Indonesia under its own CEO Mr Gede Ori Ariandika. Established in 2009, it has established itself in the international marketplace as a reliable company giving good service with eco tours and internal travel all over Indonesia but especially to our lodges.

Thanks to Gerrit Te Grotenhuis and Chris Paporoakis for certain images used on this website.

After 2 years of shutdown due to pandemic - Satwa

THE LATEST PHOTOS FROM OUR LODGE KELIMUTU CRATER L