“...at dusk we heard trees cracking and trumpeting, and

36 wild elephants swam the river in front of us.

An experience we will never forget…”

Satwa Sumatra Elephant Ecolodge is set in a lush tropical walled garden just 500 metres from the entrance of Way Kambas National Park, in Sumatra, Indonesia. The island of Sumatra is home to rare and endangered Sumatran Elephants, Rhinos and Tigers.

Our spacious cottages offer the perfect base to explore the park by foot, bicycle, river boat or safari vehicle with excellent local guides and mahouts available to suit your interests, budget and schedule.

Our Ecolodge Projects make regular contributions for the protection and conservation of the wildlife and landscape of the park.

The Magic of Way Kambas

Becoming a reserve in 1972, It has long been known for its significant population of Sumatran Elephants as well as Sumatran Tigers, Macaques, Siamang Gibbons, Malayan Tapirs, and over 300 recorded bird species including the endemic White Winged Duck.

In the 1990s, it was revealed that the park was also home to a little-known or seen population of around 40 Sumatran Rhinos – one of only three surviving populations in Indonesia.

The park now contains a Sumatran Rhino Sanctuary and an Elephant Conservation Centre including an Elephant Hospital, all committed to the conservation and care of these rare and endangered species.

The Siamang Gibbons have unique voices and are very noisy in the mornings, and if you are lucky you might see them. Every once in a while, our guests even catch sight of a Sumatran Tiger! 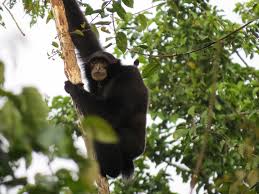 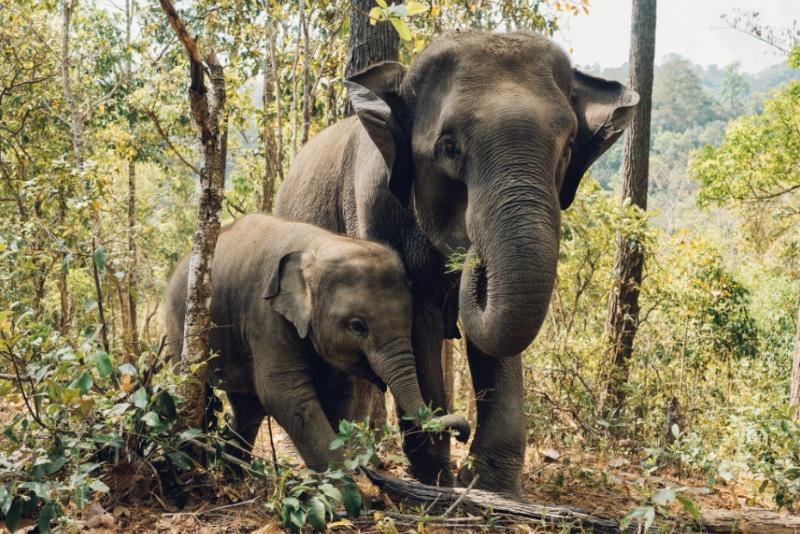 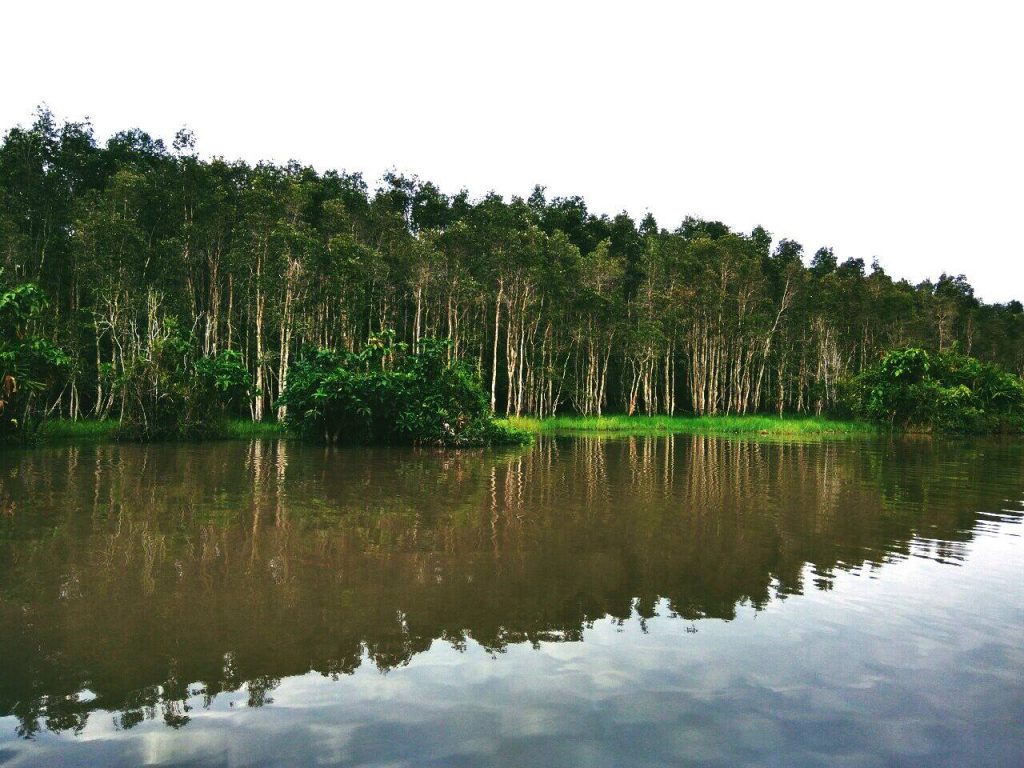 Families are welcome at Satwa Sumatra Ecolodge. A passion for conservation can start at a very young age and we revel in the opportunity to inspire young people with the beauty and excitement of our amazing wildlife and natural treasures.

Between the lodge and the tours, we will ensure that your family has a unique, special and memorable experience. Please see the Q&A below for appropriate ages and activities.

We offer four comfortable cottages each with spacious rooms sleeping up to four people with modern beds, ceiling fans and hot showers. After an exciting day of wildlife adventures, relax on a cosy chair on your veranda and watch the sun go down.

Satwa Elephant Ecolodge is dedicated to educating and empowering local communities in long term conservation and sustainable development. The lodge itself is run entirely by local villagers and our staff are now all passionate conservationists! It is a true partnership between our conservation endeavours and the local community. 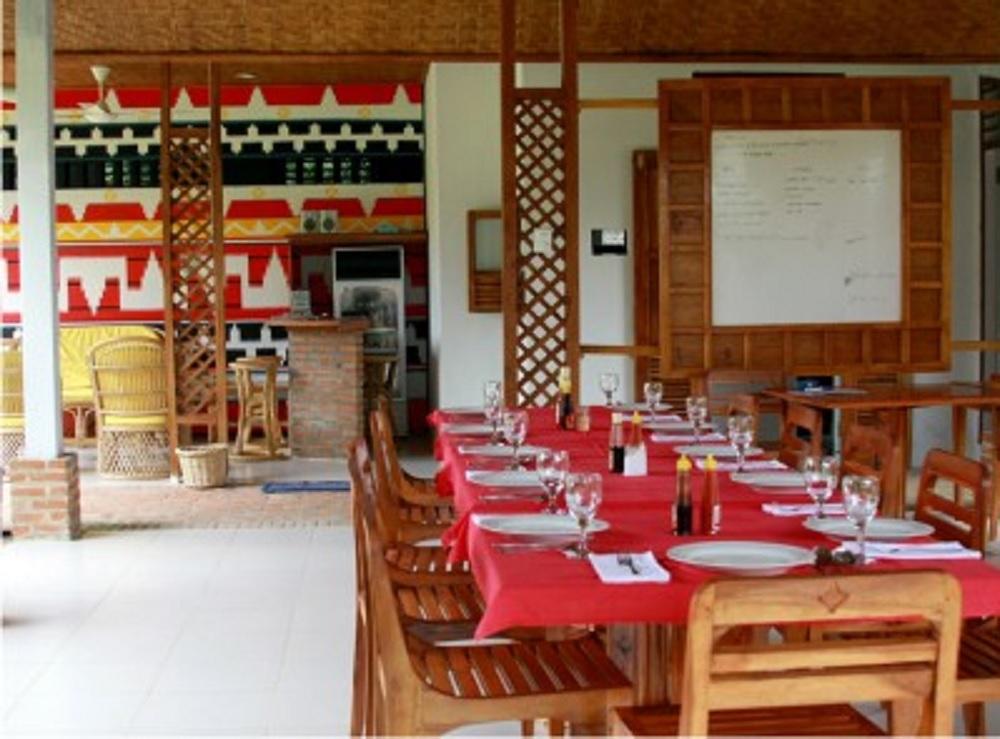 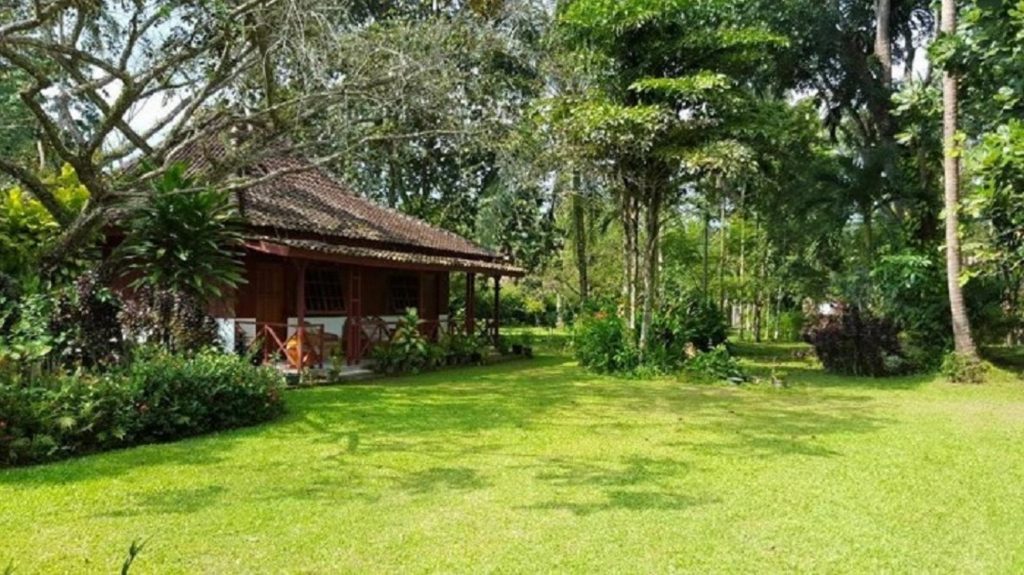 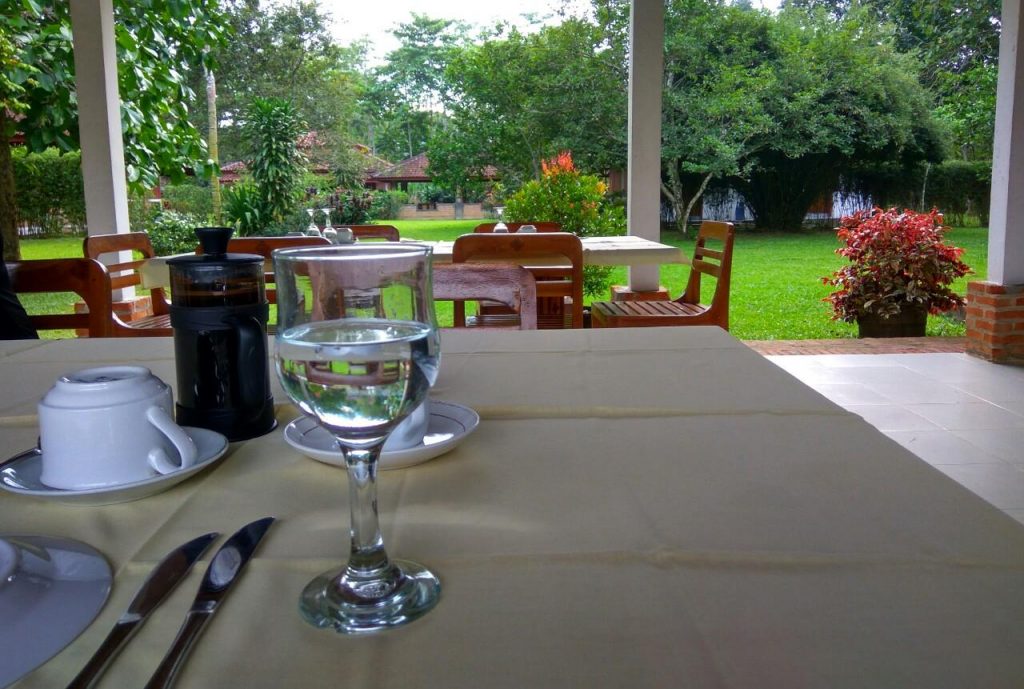 The restaurant at Satwa is delightfully open, giving guests a chance to enjoy the sounds of the local wildlife whilst recounting their days excitement and enjoying a cold beer.

Contact our reservations team to ask any questions - Just fill out this form.

Rooms from only USD $60 per night!

Work with our team to design the ideal wildlife and cultural holiday to suit your schedule, interests and budget.

We will help you customise your Satwa tours and guides to suit your schedule.

Choose from the activities below or let our booking team know what requests you have to make your stay with us the ultimate wildlife and nature adventure.

Here are some highlights to include in your itinerary... 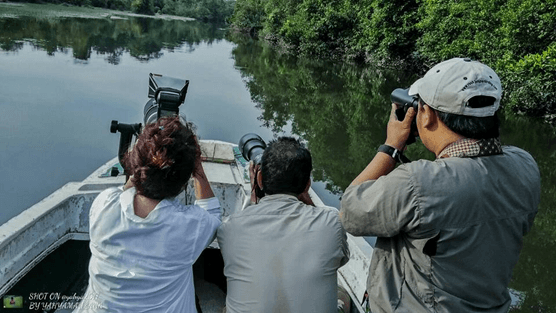 The river safari is a fantastic opportunity to see everything the park has to offer, see Crocodiles, primates, birds, mammals perhaps even a Sun Bear or wild Elephants. It is very unlikely, but you may even see a Rhino or Tiger!

The river safari trips are arranged through the national park and a ranger will accompany you or your group on the boat and for a hike into the Tiger habitat. The river safari usually starts in the afternoon and runs into the evening where you can enjoy a fabulous atmosphere as the dark closes in. 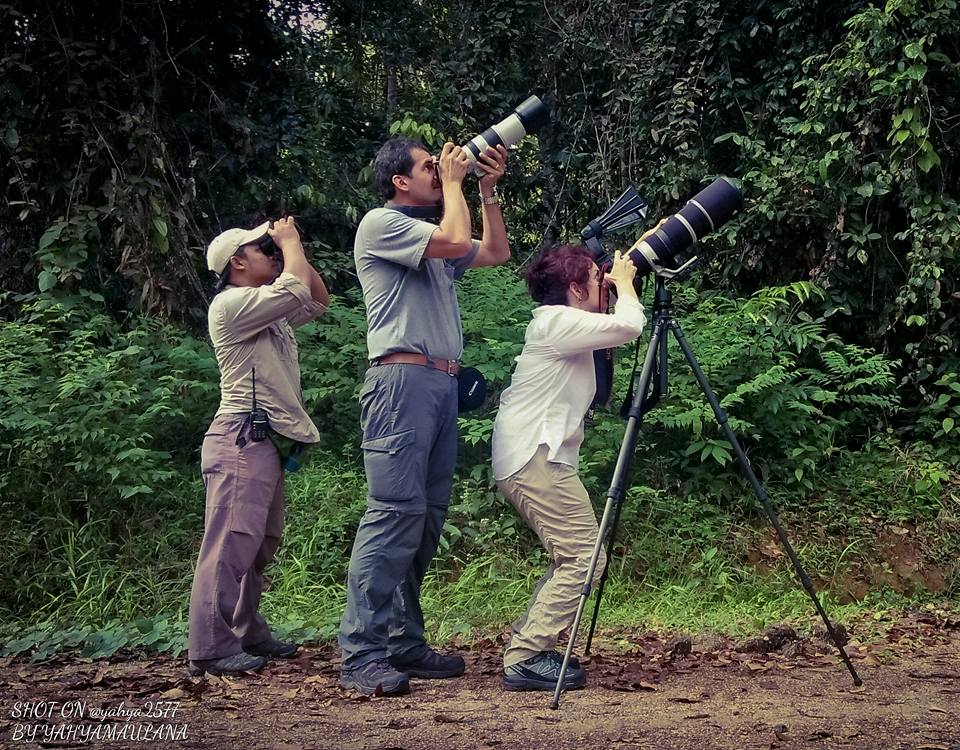 We are fortunate enough to have an experienced bird guide on staff – Heri has an extensive knowledge of most of the 320+ recorded species in the Way Kambas National Park. If your passion is birding you will enjoy all manner of birding activities exploring various parts of the park day and night.

Include a walk on the main way to the Kanan River and also past the Elephant Centre to Bambangan, some birding groups see or hear over 150 species of birds during an extended stay. The endemic White Winged Wood Duck is one to watch for. 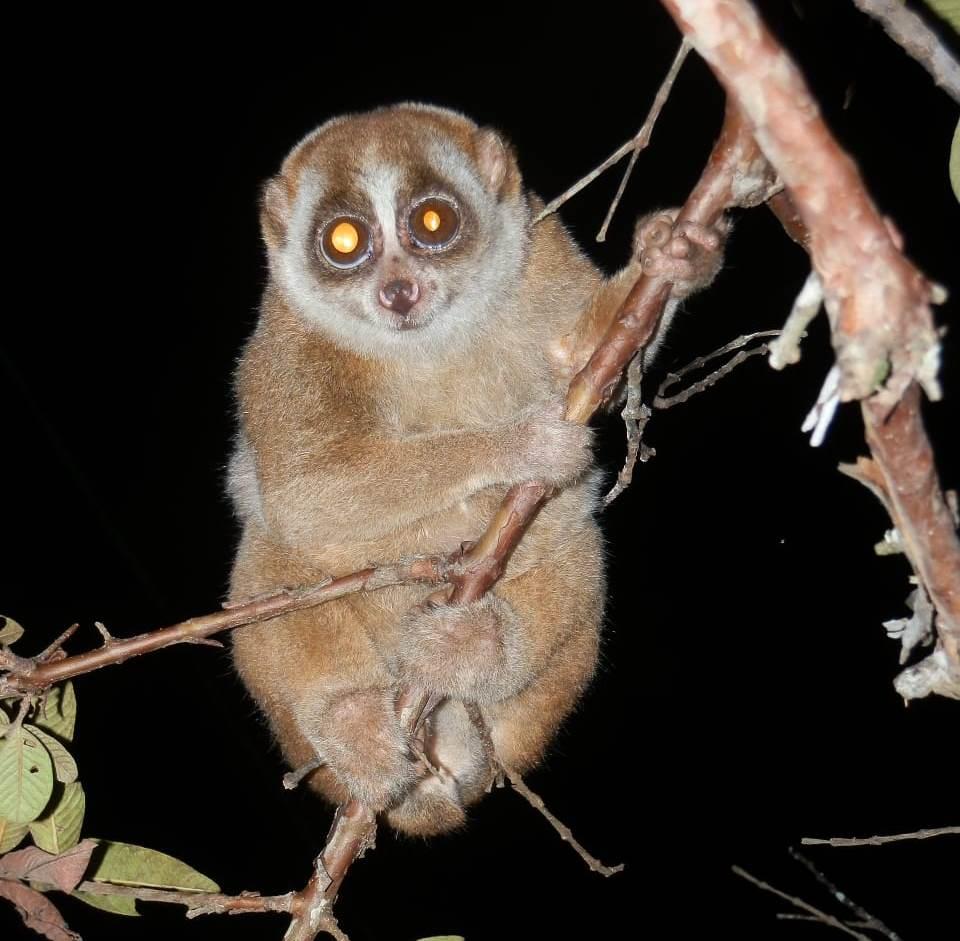 A night walk tour is not to be missed! Join our experienced local guide Heri for one of his exciting night walks through the National Park. The sights and sounds of the flora and fauna are entirely different at night! Here you will see and hear the behaviour of nocturnal birds, and mammals, and if you are lucky, a wild Elephant. 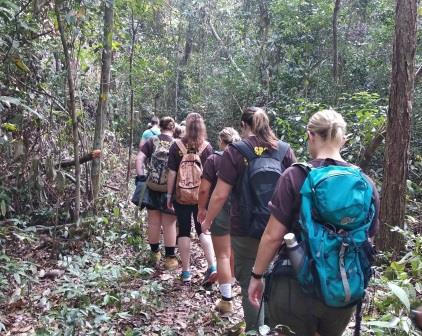 From the river boat you can also head to Kalibiru (around 60 minutes). Here you can enjoy a fascinating walk to Rawa Gajah, a swamp area where wild Elephants are often seen. Depending on the season, this area is may be grassland or it may be submerged under waist deep water. Sambar Seer, Wild Pigs, Binturong and the endangered White Winged Wood Duck have all been seen here. The trail often shows scats, pug marks and tree scratchings from Tigers.

After a picnic lunch, take a slow walk back to the boat and you may see primates, different bird species, deer or elephants on the journey home. 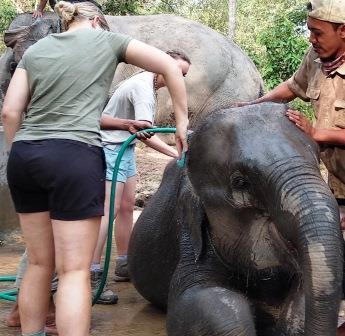 The Elephant Response Unit is a unique and innovative project that has successfully saved hundreds of wild elephants from harm. The unit was devised to reduce the conflict between humans and elephants, by using trained elephants to herd wild elephants away from villages. With fewer elephants destroying villages, fewer villagers now harm or kill the elephants in an effort to protect their homes and agriculture.

The ERU has staff monitoring nightly for marauding elephants. You can visit unit headquarters during your stay here and even attend any callouts that may happen while you are present. This is an exciting opportunity for our guests to see their work in action.

The Elephant Conservation Centre offers a great opportunity to see the unique life long relationship between a Mahout and their Elephant. When visiting bring some sugar cane from the lodge grounds to help you make friends! If you wish, you can stay here all day to help to wash and feed the local residents too. 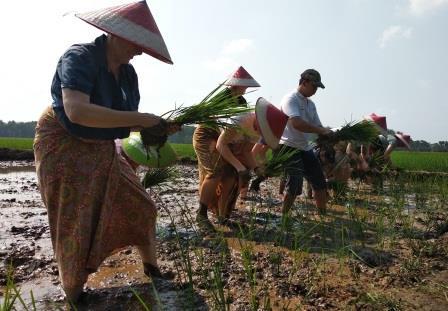 Satwa Elephant Ecolodge is only a short walk from the entrance of the National Park passing through a pleasant rural village. Local people migrated here from Java generations before. Employment and locally purchased goods by the Ecolodge significantly help the village and give the local people sustainable employment.

Take a stroll here for a snapshot of day to day living. Most villagers work as farmers and gardeners, and if you wish we can book the local dance performance group to entertain you at the lodge. 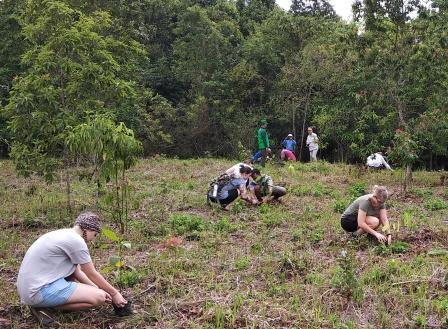 Bambagan is an area 12 km beyond the Elephant Centre which has suffered from fire destruction and is being reforested by the park with the help of the NGO - ALERT Conservation. The area is still threatened by poachers and illegal burning.

A visit to Bambangan includes the Ranger station where you will be given a local perspective of the area by a park ranger. Here you will enjoy a picnic lunch and meet some unique park rangers who have dedicated their lives to conservation.

You can also plant a tree for a minimal fee and contribute to the reforestation and new forest around you. After a siesta, it is time for a short hike to the river accompanied by your guide and a park ranger to see if you can catch a glimpse of the endemic White Winged Wood Duck and many other exotic birds of the area.

If you love butterflies, visit Butterfly Bridge one day for lunch – here up to 50 species have been seen during a one-hour period. Large populations of butterflies occur only at certain times of the year prior and just after the rains; but try anyway.

Way Kambas National Park is also home to the Sumatran Rhino Conservation Centre. The centre is currently closed to visitors due to a health and breeding program for this critically endangered species.

Taronga Zoo in Sydney, Australia is the biggest funder for this important project and it is now possible for some visitors to arrange to meet with the resident veterinarian. If you wish to enquire about this, please inform our booking team when planning your time here.

Q: Is there a restaurant at Satwa Sumatra Ecolodge?Expand

A: Yes! Our meals offer a delicious example of Indonesian recipes and ingredients and includes a full western breakfast to start the day, or a picnic box for tours. All of our food is made with fresh ingredients from the garden and local village and we cater to all dietary requirements – please inform us of your needs prior to arrival.

Q: Can we book an all-inclusive package?Expand

A: As with all of our Ecolodges properties you can choose private tours, transfers, meals and special activities. These may be arranged with our booking team as an all-inclusive package, allowing you to arrive at the airport and have all of your needs catered to. You may also wish to visit multiple properties and enjoy a large variety of wildlife adventures on multiple Indonesian islands. For more information please review our private tours or contact our booking team to help you plan the ideal wildlife tour to suit your schedule, interests and budget.

Q: What is your Eco Standards System?Expand

A: At Ecolodges Indonesia, each of our properties is dedicated to sustainable development and operations.

From 2001 – 2009 Ecolodges Indonesia worked with Green Globe 21 to internationally accredit one of our lodges. This gave us an excellent insight into international standards and expectations for genuine sustainability.

We have now developed our own stringent 30,000 point system that we use to measure and maintain the eco standards of all our lodges. For more on our eco endeavours and achievements please visit our “Why Eco” page.

Q: How does your Conservation Programme work?Expand

A: $10 from every client of our travel company Ecosafari Indonesia is donated to the company conservation fund. Also, a percentage of our profits go to specific conservation projects like planting new trees in the park to replace those burnt in the devastating fires of 2015.

Recently, we sponsored Australian firefighters to fly to Indonesia and train locals in the skill of fire-fighting, adding to our continuous programme of educating and empowering local communities in long-term conservation. For more details please visit our conservation page.

Q: Is there a risk of malaria? Expand

A: This is a very low-risk area and we advise long trousers and long sleeved shirts in the evening with repellent in exposed areas. Your rooms are mosquito proof but please close the doors.

Q: What is a suitable age for children to be at Satwa Ecolodge?Expand

A: Babies carried by their parents are welcome. We do have one cot and a high chair available. Remember mosquitoes and the sun.

Toddlers would enjoy the flat gardens and watching elephants but parents would have to carry them on walks. On the boat ride they would need constant supervision.

Children over eight would enjoy the boat, watching elephants and walking.

**Please note: Children must be supervised by a parent at all times and obey the Guides instructions.

During the parents evening meal, a staff member can sit outside the room of sleeping children.

***PLEASE NOTE: CHILDREN ARE SOLELY THE RESPONSIBILITY OF THE PARENTS***

Contact our reservations team to ask any questions - Just fill out this form.

Rooms from only USD $60 per night!

Work with our team to design the ideal wildlife and cultural holiday to suit your schedule, interests and budget.